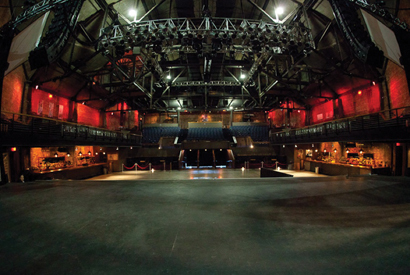 Formerly the site of the IMAC (Inter-Media Arts Center) Theater, the Paramount bears little resemblance to the old facility. Beginning in 2009, the interior space was completely gutted and underwent a total renovation. An entirely new audio system was installed including 20 JBL VerTec VT4888DPDA powered midsize line array elements on each side of the stage and 14 JBL MS28 compact loudspeakers located throughout the venue as lip, under-balcony, VIP box and rear bar fills. Crown I-Tech HD amplifiers power the MS28 speakers. An additional two hangs of six VT4887A compact line array elements each were installed for use with the VT4888DPDA line arrays as part of a 360-degree dance floor system. Crown I-Tech HD9000 amplifiers power the VT4887A loudspeakers.

“The construction of the Paramount was one of the most dramatic ‘before’ and ‘after’ transformations I’ve ever encountered,” said Beck. “Previously, the IMAC Theater was a plain-looking 600-seat room that occupied the top floor of the building, with a basement underneath. The entire floor of the IMAC was demolished, along with almost all the existing interior to create a huge space with floor, mezzanine and balcony seating, a VIP box on each side of the main floor and a large lobby.”

Once the initial demolition was complete, the Paramount owners realized they had a jewel in the making, with beautiful brick walls along all the sides going all the way to the top of a gracefully arched ceiling. “The owners wanted to preserve as much of its character as possible,” Beck said, “including architectural detailing like a patterned metal ceiling and stone ornamentation that dated back more than a century.”

However, that meant Maryland Sound would have to work with some very challenging acoustics. “Those brick walls and hard ceiling made for an extremely reflective acoustic environment—and we couldn’t ruin the look of the venue with acoustic treatment everywhere,” Beck added. “We went with the VerTec VT4888DPDA line arrays for the main system because aside from sounding great, we knew their controlled dispersion would direct almost all of their sound to the main floor, without bouncing off the sidewalls and ceiling and exciting the space with excessive reverberation.”

“The layout of the Paramount isn’t typical—in addition to the floor, mezzanine and balcony, there is a VIP box on each side of the main floor, and there are bars underneath the VIP boxes with a ‘sky bar’ section at the very back of the hall under the balcony,” Beck noted. “We had to install fill speakers in all of these spaces. The JBL MS28 speakers were ideal—they’re compact, full-range, play loud and mount easily on a wall or ceiling.”

“When it was time to fly the VerTec VT4888’s, we realized we didn’t like where the plans indicated we had to hang them,” Beck continued. “In most situations you’d just have to live with it, but since we were installing the system at the same time as the main construction, we were able to ask the contractors to install new steel girders at six different points other than originally planned, and we re-did the rigging points right on the spot. That’s something I’ve never encountered before in a club environment.”

Maryland Sound used HARMAN HiQnet System Architect 3.0 software to tune the system and the interface between the speakers and the amplifiers. “It works so well that we don’t have to use any outboard EQ,” Beck noted.

“We are really happy with the way everything turned out,” Beck concluded. “We were able to deal with a challenging situation and install a system that sounds excellent, and does not intrude upon the beautiful interior of the Paramount.”